OMNI peace-garden includes World Peace Wetland Prairie and eight private gardens around the city: Click on link to ENLARGE for easy reading of attached list of addresses of the nine gardens 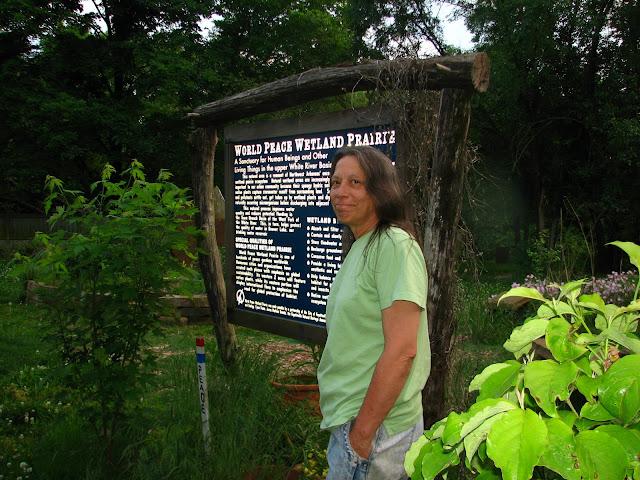 Buffalo River and Arkansans' history in support of the state's environment

Wand over the gray area and download choice will appear. click download to go the the slide show on the UA site and use live links to see more. 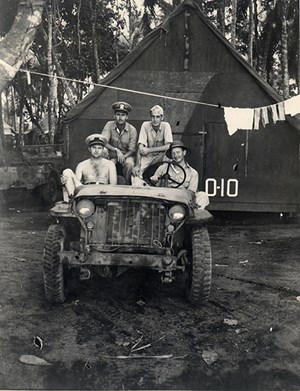 “Neil Compton on Guadalcanal.” Compton in 1944 (back row, on right). From 40-50-100: Milestones in Arkansas’s Environmental History, University of Arkansas Libraries, Fayetteville. Neil Compton Papers (MC 1091, Box 25, File 6, Image 97).
FAYETTEVILLE, Ark. –The University Libraries’ special collections has launched a digital exhibit, available online, that celebrates environmentalism in the Natural State. “40-50-100: Arkansas’s Natural Environment” commemorates the 40th anniversary of the Buffalo River’s designation as a national river, the 50th anniversary of the founding of the Ozark Society environmental conservation group, and the 100th anniversary of the birth of Neil Compton, founder of the Ozark Society. The Libraries celebrated these anniversaries with an event in 2012.
The digital exhibit includes several photos of Bentonville physician Neil Compton, from his childhood on the family farm near Gentry, to tending azaleas in the Crystal Spring Gardens in Bentonville (now the home of Crystal Bridges Museum of American Art). Documents include a letter Compton wrote his daughter, Ellen, in 1960 where he mentions his idea for a “Buffalo Gorge National Park;” a letter from Gov. Orval Faubus to the U.S. Army Corps of Engineers opposing the dam projects at Gilbert and Lone Rock; posters created by the Buffalo River Improvement Association advocating for the dams and reservoirs; and a fervent letter from Lucile Hannon of Pruitt,, to U.S. Secretary of the Interior Walter J. Hickel demanding that the federal government stay away. The collection is available online through the Libraries’ website.
Visitors to the digital exhibit will also be able to view Compton’s 1963 film “Opportunity for Arkansas – the Buffalo National River,” which advocated the preservation of the river. The film was recently restored through a grant from the National Film Preservation Foundation.
“Saving the Buffalo River was not an overnight success; instead, it was a battle that lasted years, but, luckily, the river had a core group of supporters who recognized the importance of preserving its pristine beauty,” said Timothy G. Nutt, head of special collections. “This digital exhibit shows how tirelessly Dr. Compton and members of the Ozark Society worked to save the Buffalo.”
The materials in this digital exhibit represent only a fraction of the manuscript collections supporting research on Arkansas’ environmental history. Collections that document the battle over the Buffalo include the Ozark Society Records (MS OZ1 219, 219A-I Ozark and MC 477), the Neil Compton Papers (MC 1091), the Gus Albright Scrapbooks (MC 1295), the Kenneth L. Smith Papers (MC 1423), and the Margaret Hedges typescript reminiscence (MC 1203) of Supreme Court Justice William O. Douglas’s visit and canoe trip on the Buffalo River in 1962, which spurred the formation of the Ozark Society.
The “40-50-100” project is just one of the digital exhibits created by the Libraries to highlight interesting aspects of the state’s history. Other digital exhibits, which can be viewed at scipio.uark.edu, document the civil rights struggle in Arkansas, the history of the apple industry in Northwest Arkansas, and the legacies of Congressman Brooks Hays and political cartoonist George Fisher. Additional information on any of the Libraries’ digital and manuscript collections is available by calling special collections at 479-575-5577.
Keywords: Libraries Politics & Social Sciences Sustainability & Environment