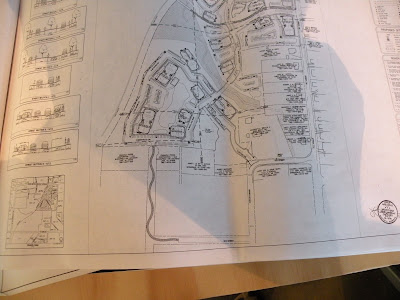 Please click on image to ENLARGE meandering trail route through a portion of Pinnacle Prairie south of the Hill Place student-apartment development site.


A 12-foot-wide, meandering asphalt trail is to be built soon by the Hill Place contractors through Pinnacle Prairie as one of the conditions of approval of the Hill Place project. It will connect walkers, joggers, bicyclists and nature lovers with W. 12th Street to the southeast and with sidewalks in the apartment complex leading east to W. 11th Street and S. Duncan Avenue to provide a circular paved route around the nature area and the new area of city park connected to World Peace Wetland Prairie's Northeast corner. From the prairie trail, pedestrians and cyclists also can walk about four blocks north inside the apartment complex, crossing a new traffic bridge over the Town Branch of the West Fork of the White River and reaching the Indian Trail that roughly follows the old right of way of the east-west railroad. A former railroad tunnel will allow trail-users to go northwest to Fayetteville High School and the University of Arkansas.
Posted by aubunique at 5/31/2009 11:55:00 AM No comments:

Arkansas “Don't Do Fescue" is theme of AGFC public campaign
JONESBORO - Tall fescue is a widely used forage crop. It is insect resistant, tolerates poor soil and climatic conditions well and has a long growing season. Unfortunately, tall fescue also has a downside.

With approximately four million acres of pasturelands planted in tall fescue, Arkansas has a great deal of this crop. According to David Long, agricultural liaison with the Arkansas Game and Fish Commission, the agency is working diligently to help the public understand the shortcomings of this type of grass.

"The AGFC has developed a new tool in its effort to educate landowners about the toxic and negative effects of Kentucky 31 Tall Fescue to farm wildlife. A new bumper sticker entitled 'Don't Do Fescue' is now being distributed to agency employees and others interested in spreading the word," Long said. Tall fescue is a common forage grass that has been planted across Arkansas for over 40 years.

Estimates are that about 70 percent-95 percent or 4 million acres of the pasturelands planted with tall fescue in Arkansas are infected with an endophyte fungus. The fungus causes declines in bobwhite quail, cottontail rabbits, grassland songbirds and also limited other game populations such as white-tailed deer and wild turkey.

"The fact that the plant is actually toxic to both domestic livestock and farm wildlife species is accepted by agriculture extension specialists and wildlife biologists alike," Long said. "The plant produces chemicals causing the fescue to have very toxic qualities. The alkaloids are found throughout the plant, but are especially concentrated in the seeds and leaves," he explained.

"It's very important for private landowners who desire viable wildlife populations on their property to know the effects of planting fescue," Long noted. "Many species of wildlife would directly suffer these same negative effects if they were confined to the pasturelands as are livestock. However, since they are free ranging, they simply avoid the fungus infected fescue pastures, but nevertheless, this results in loss of farm wildlife habitat on these acres. You may have deer and turkey travel through tall-fescue pastures, but they rarely find food sources available they can utilize, since the aggressiveness of the fescue usually results in solid stands of the plant," Long concluded.

The grass is a sod-forming turf with thick matted growth that also limits movement of young bobwhite quail, turkey and cottontail rabbits, provides no nesting habitat for wild turkey or quail, and is extremely poor habitat for many declining grassland species of songbirds. "Bottom line, fungus infected tall-fescue pastures offer little food, cover or nesting habitat to a broad range of farm wildlife," he said.

"Tall fescue has been planted in an estimated 4 million acres of the 5.4 million acres of pasture scattered over the state and for all practical purposes is of no value to farm wildlife. With the widespread establishment of tall fescue pastures, a great loss of wildlife habitat for deer, turkey, quail, cottontails and grassland songbirds has occurred.

Many landowners now recognize this problem and are interested in eliminating tall-fescue on some or all of their acreage. However, many landowners continue to plant tall-fescue, not knowing the detrimental effects it will have to wildlife. (There is an endophyte-free variety of tall fescue available for planting but it is less viable and hardy, and still provides very limited habitat for wildlife.)

We want to educate all landowners regarding this fact because there are other planting options to providing livestock forage and wildlife habitat on their farms," Long explained.

Please help spread the word to landowners "Don't Do Fescue!" by requesting a bumper sticker to place on your vehicle. Especially if they have an interest in managing for wildlife on their farm. For more information contact David Long at 877-972-5438 or dlong@agfc.state.ar.us.
Posted by aubunique at 5/30/2009 09:51:00 PM No comments:

Please click on images to ENLARGE view of big bluestem grass on World Peace Wetand Prairie on May 27, 2009. Andropogon gerardii is the best known of the tall grass prairie of the United States. 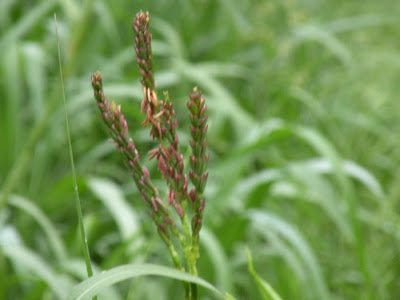 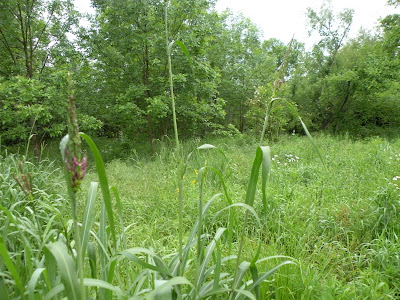 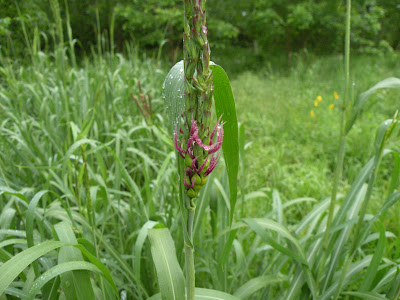 Penstemon digitalis attracts bumblebees on WPWP on May 21, 2009

Please click on images to ENLARGE view of Penstemon digitalis, aka Foxglove beard tongue, on World Peace Wetland Prairie on May 21, 2009. 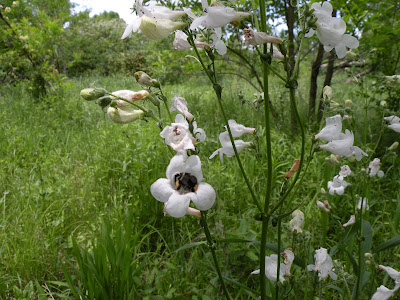 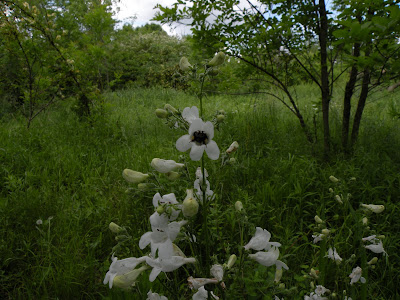 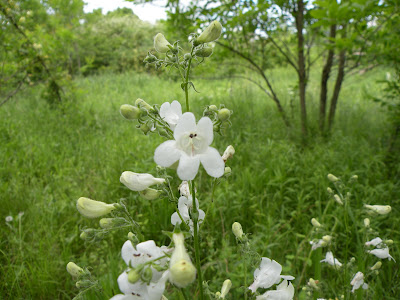 Please click on images to ENLARGE view of Lonicera flava, the so-called "yellow" honeysuckle native to several states in the central U.S. Like the Lonicera sempervirens, flava is not invasive and struggles for sunlight as the Lonicera japonica, Japanese honeysuckle overwhelms almost everything in natural areas such as WPWP. 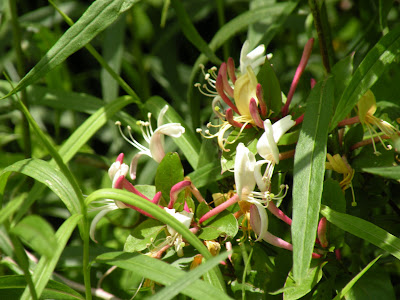 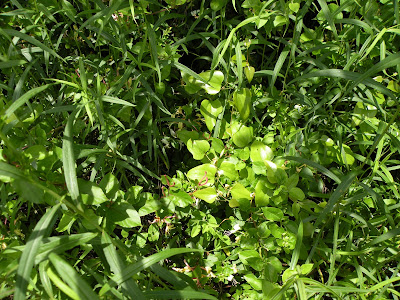 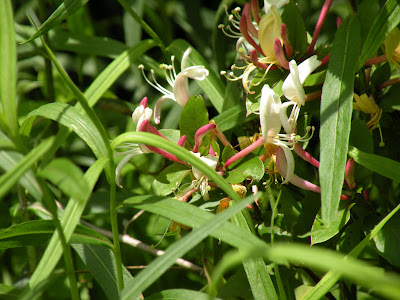 Spider milkweed or green milkweed (Asclepias viridis) in bloom on World Peace Wetland Prairie on May 16, 2009 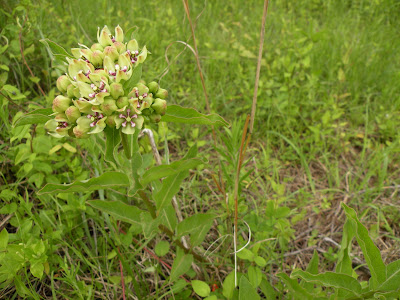 Please click on image to ENLARGE view of viridis 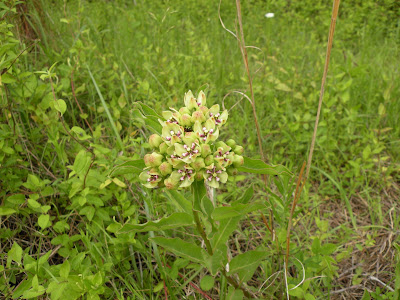 Join us for this special Watershed Academy Webcast in celebration of American Wetland Month. The Webcast will explore how we as a society, and especially our children, have become increasingly disconnected from the natural world. Richard Louv, chairman of the Children and Nature Network and renowned author; Suzanne Pittenger-Slear with Environmental Concern, Inc.; and Davon Kenneth Johnson with the Earth Conservation Corps will talk about efforts to change this trend and discuss the unique role that wetland can play in reconnecting young people with nature.

Be sure to check out all the great Watershed Academy Webcast archives at http://epa.gov/watershedwebcasts/
Posted by aubunique at 5/15/2009 11:49:00 AM No comments: 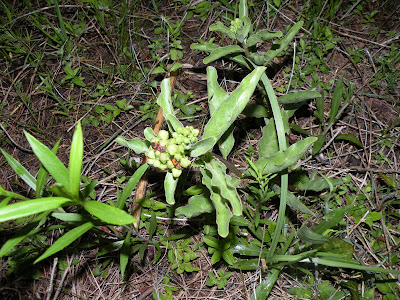 Please click on images to ENLARGE view of spider milkweed (Asclepias viridis) with milkweed bugs on the soon-to-bloom inflorescence in the top photo, another spider milkweed in the second photo and a swamp milkweed (Asclepias incarnata) that will grow another 4 feet tall before blooming. The three dead stems at right in the third photo are last year's swamp milkweed stems from the same root. If you want to read more about these plants and their significance to the continued existence of the monarch butterfly, please use the Latin name in searching. Spider milkweed is also the common name of a very different species as well. 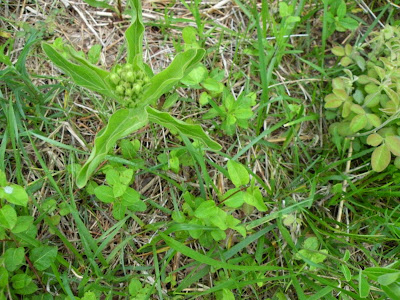 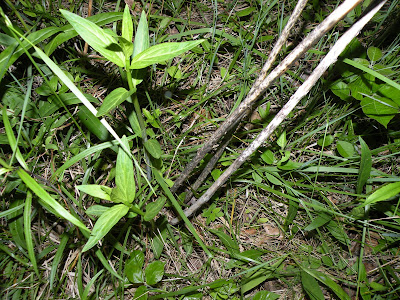 Please click on images to Enlarge view of mushrooms on World Peace Wetland Prairie on May 6, 2009, 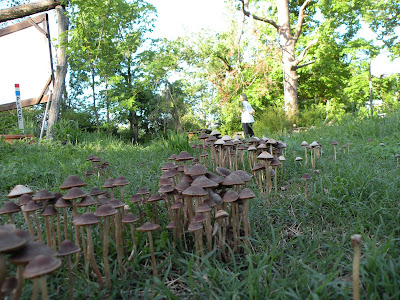 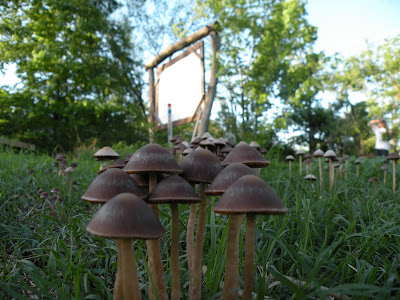 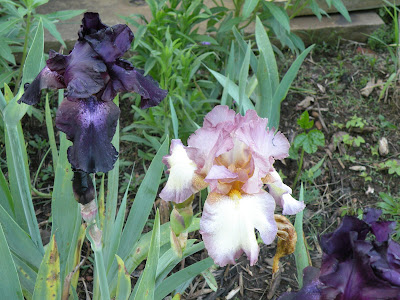 Please click on images to ENLARGE view of peach-colored iris on World Peace Wetland Prairie on May 5, 2009. 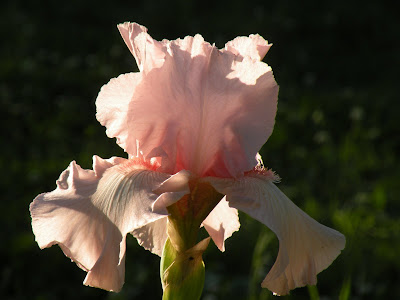 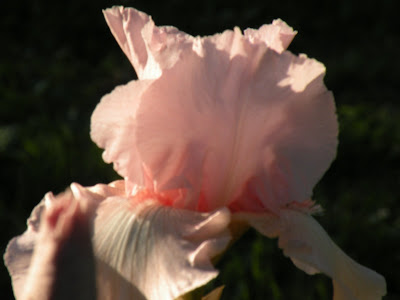 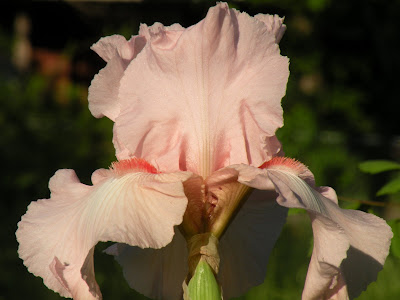 Lonicera sempervirens, aka trumpet honeysuckle, a non-invasive native cousin of the Japanese honeysuckle

Erysimum capitatum, aka western wall-flower, on World Peace Wetland Prairie on May 3, 2009

Please click on image to ENLARGE view of western wall-flower on WPWP on May 3, 2009. 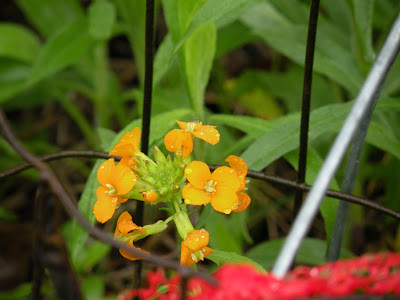 Native honeysuckle in bloom with spider milkweed showing buds of coming inflorescence on WPWP on wet Sunday May 3, 2009

Please click on images to enlarge view of native honeysuckle blooming in top photo and spikder milkweed soon to bloom in lower photo. 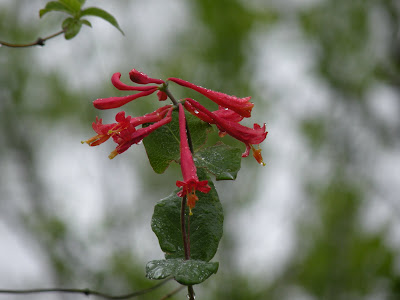 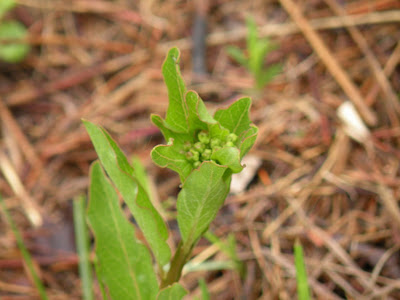 FarmToTable theme of today's program in the Rose Garden of the Walton Art Center with renewable-energy lecture at Night Bird bookstore at 2 p.m. 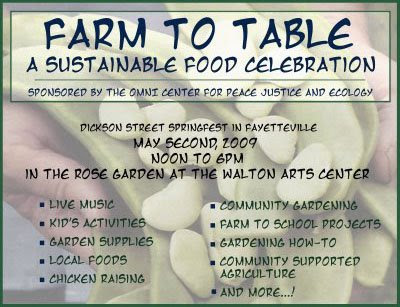 Please click on image to ENLARGE view of poster. 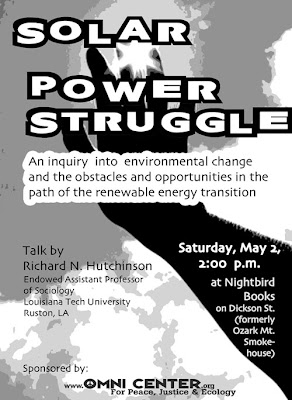 Solar Power Struggle
Professor Richard Hutchinson of Louisiana Tech University in Ruston will speak on "The Struggle for the Solar Future" at 2 p.m. on Saturday, May 2, at Nightbird Books on Dickson Street in Fayetteville, Arkansas.
An inquiry into environmental change and the obstacles and opportunities in the path of the renewable energy transition.
Sponsored by OMNI Center for Peace, Justice, and Ecology.
Posted by aubunique at 5/02/2009 08:47:00 AM No comments: