Love Box facility destroyed only a mile west of WPWP; the railroad through the site is important as a future trail and/or future light rail route and currently as a part of the green infrastructure, continuous wildlife habitat where deer cross from hills to prairies to other prairies to other hills.

Please click on image to ENLARGE view of wasp on goldenrod at WPWP on October 28, 2010 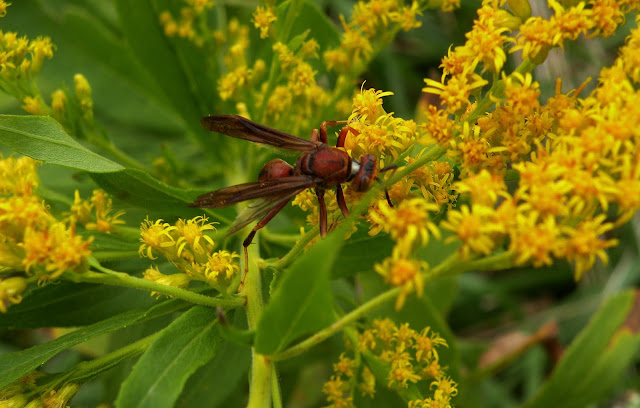 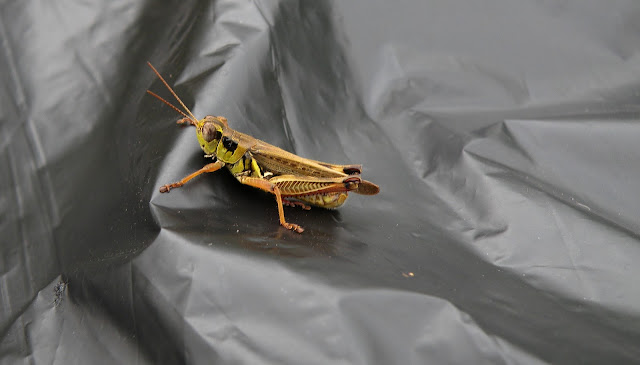 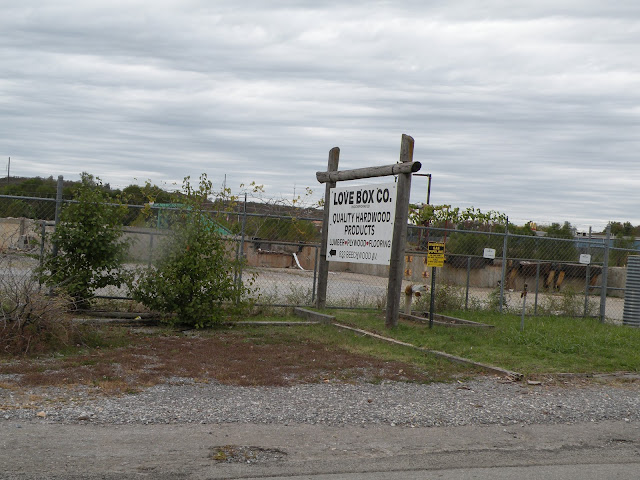 Please click on image to ENLARGE view of monarch butterfly over World Peace Wetland Prairie on October 27, 2010, in top photo. 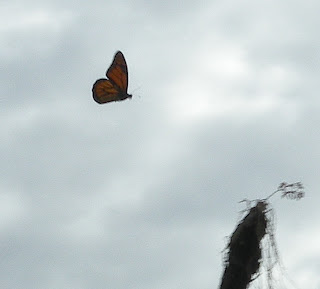 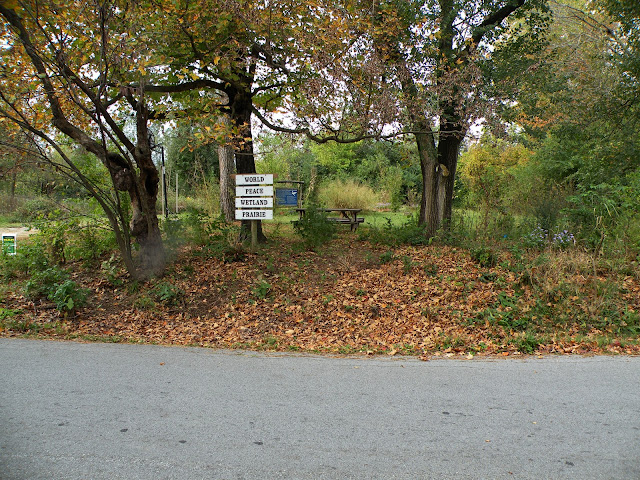 Please click on image below to view seed pods of swamp milkweed on World Peace Wetland Prairie on October 27, 2010. 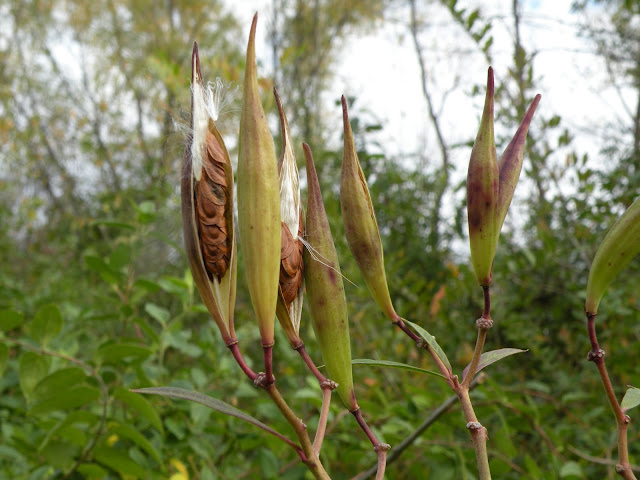 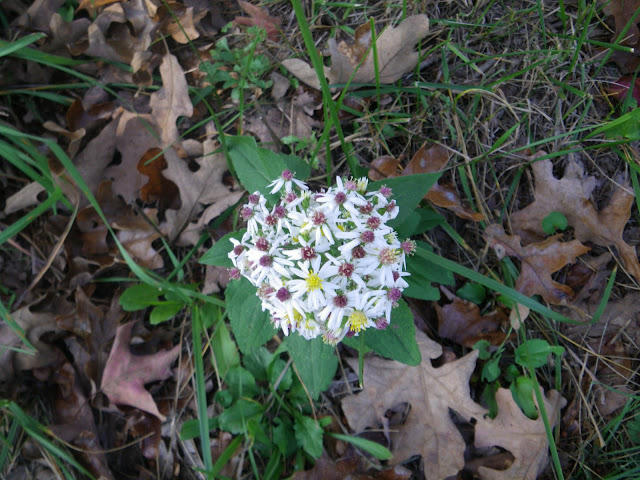 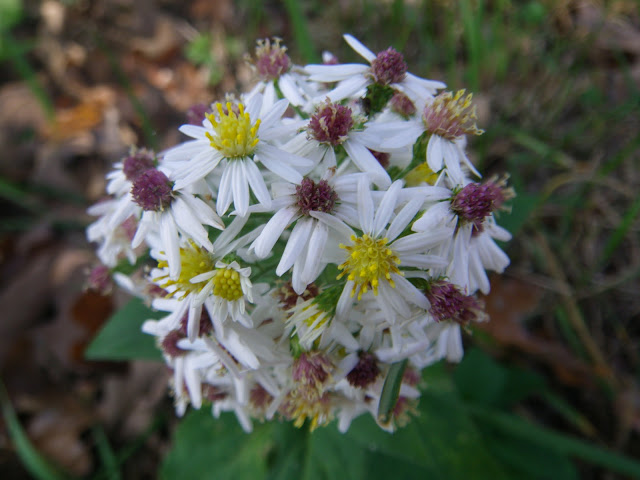 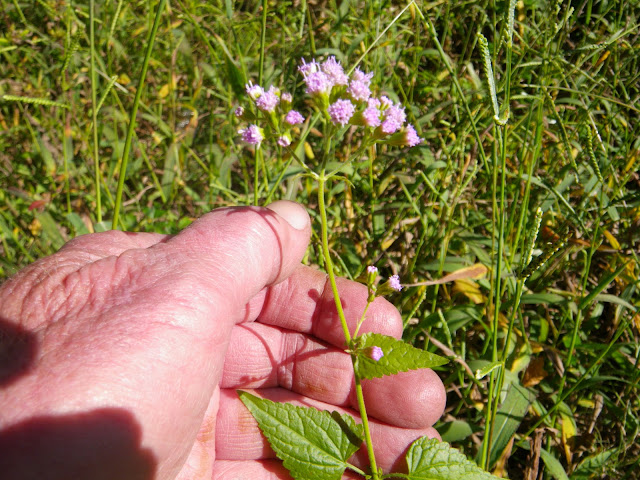 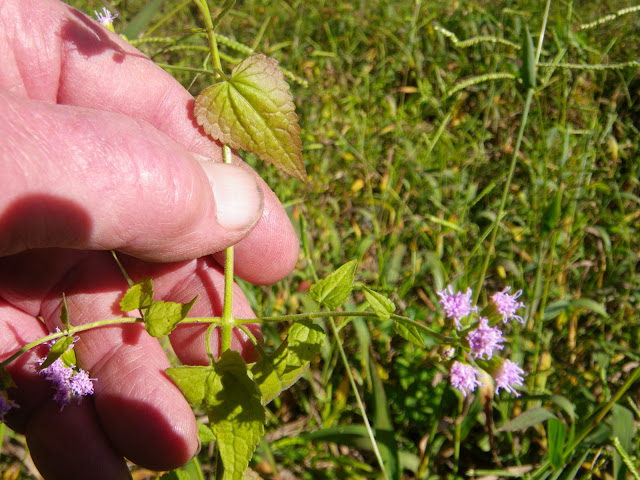 Please click on image to ENLARGE for easy reading. 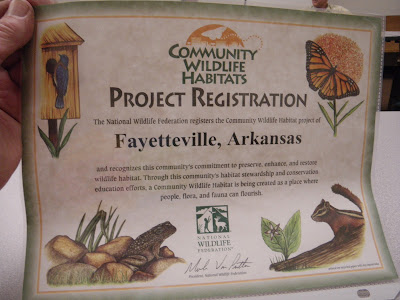 World Peace Wetland Prairie is a small but important piece of wildlife habitat in Fayetteville, Arkansas, that became a city park in 2005. Learn of five previous years of effort to make that happen at Aubunique.com
Posted by aubunique at 10/15/2010 07:12:00 AM No comments: 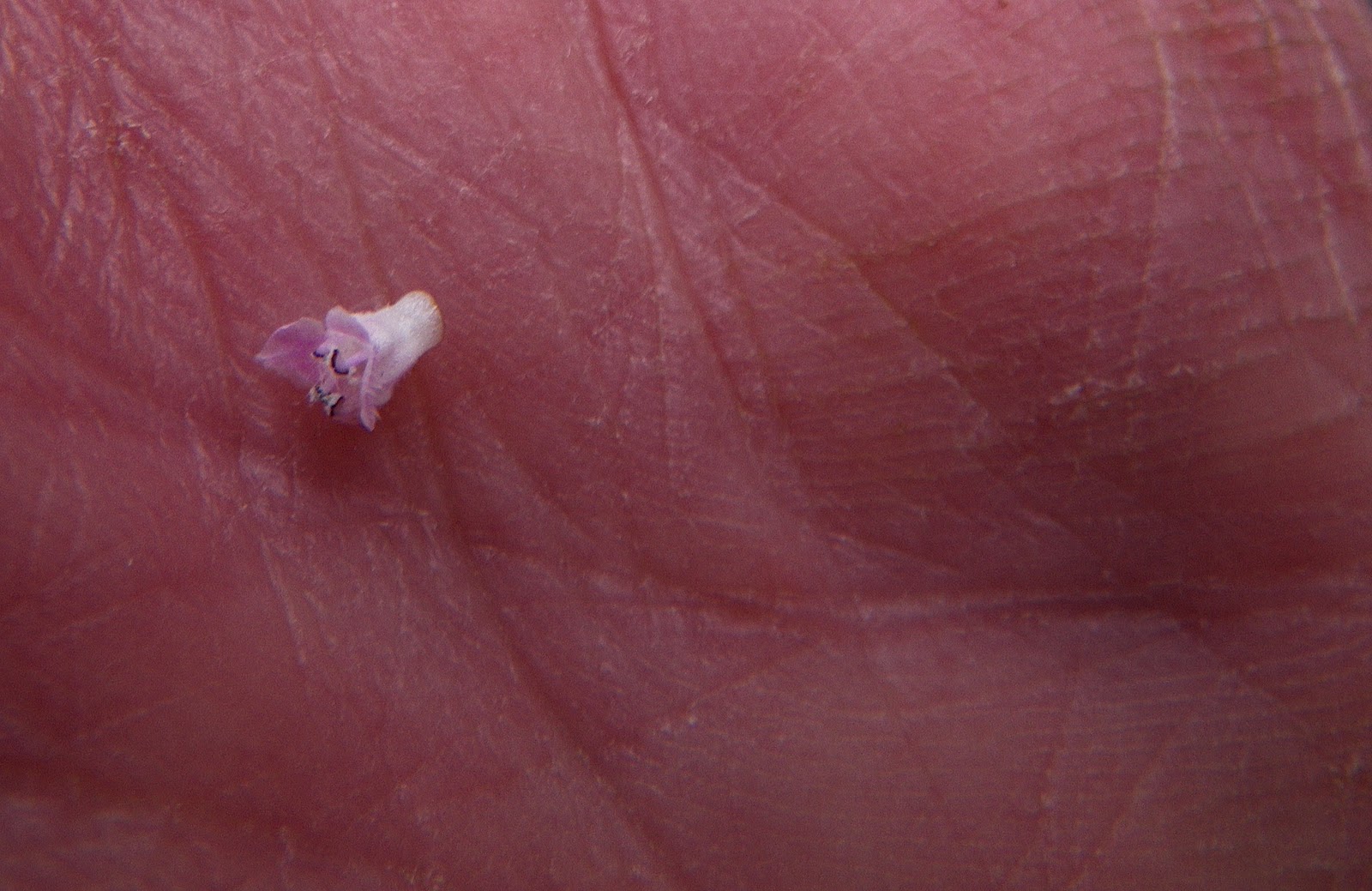 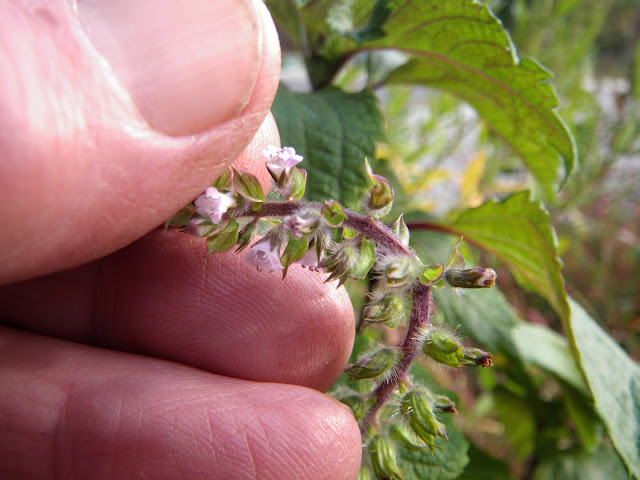 Please click on individual images to ENLARGE. Top photo is high enough resolution that one can use computer tools to enlarge several more steps. 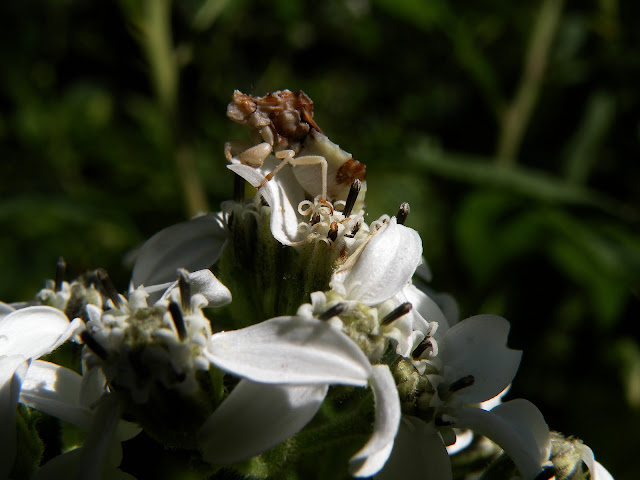 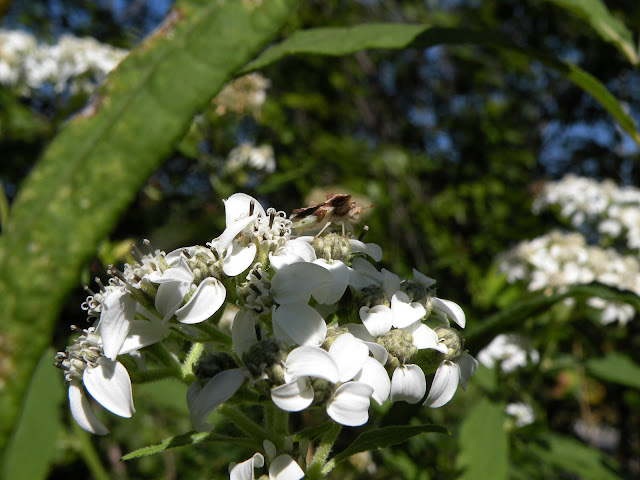 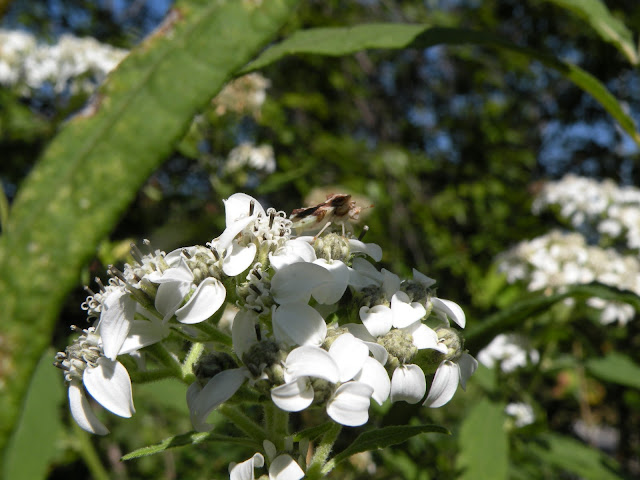 American basketflower featured on You Tube video based on Aubrey James Shepherd's photos and first telecast on CAT 18 in Fayetteville, Arkansas

aubunique: Tree and Landscape Committee sets annual city tree...: "12th Annual Celebration of TreesSaturday October 9, 2010 7:00 am Town Center entrance on the Fayetteville SquareEvery year the Tree and Lan..."
Posted by aubunique at 10/06/2010 10:55:00 AM No comments:

Red admiral butterfly on frostweed on October 2, 2010: Like monarch butterflies, this species makes long migrations each year. Use links below to learn more

Please click on image to ENLARGE view of Vanessa atalanta, the red admiral butterfly, nectaring on Verbesina virginica, white crownbeard, one of several species of native plants that are called frostweed because of the winged stems that appear wrapped in ice flowers early on clear, cold fall mornings. 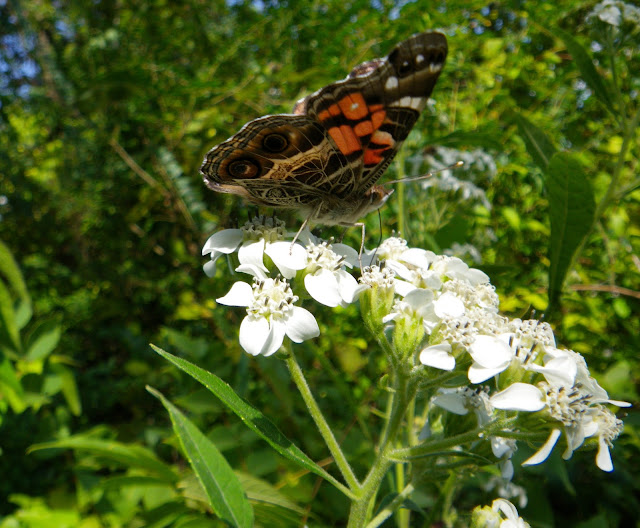 Identification: Upperside is black with white spots near the apex; forewing with red median band, hindwing with red marginal band. The winter form is smaller and duller, summer form larger and brighter with an interrupted forewing band.

Life history: The Red Admiral has a very erratic, rapid flight. Males perch, on ridgetops if available, in the afternoon to wait for females, who lay eggs singly on the tops of host plant leaves. Young caterpillars eat and live within a shelter of folded leaves; older caterpillars make a nest of leaves tied together with silk. Adults hibernate.

Flight: Two broods from March-October in the north, winters from October-March in South Texas.

Adult food: Red Admirals prefer sap flows on trees, fermenting fruit, and bird droppings; visiting flowers only when these are not available. Then they will nectar at common milkweed, red clover, aster, and alfalfa, among others.

NatureServe Global Status: G5 - Demonstrably secure globally, though it may be quite rare in parts of its range, especially at the periphery.

Gray hairstreak butterflies and many other beneficial insects use the tiny white flowers of smartweed for nectar and many species' caterpillers eat the vegetation of the smartweed. Please see links below to read more

Please click on individual images to ENLARGE and widen view of October 3, 2010, photos from World Peace Wetland Prairie.
And see what one urban gardener has to say about smartweed. 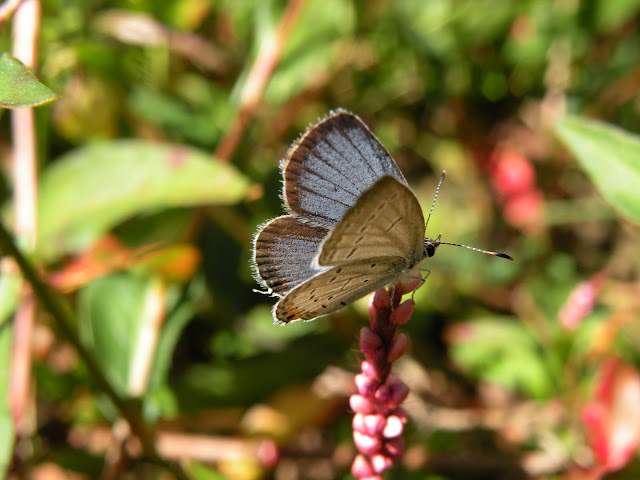 Smartweed valuable to many butterflies and birds. To read more, please see the following smartweed link. 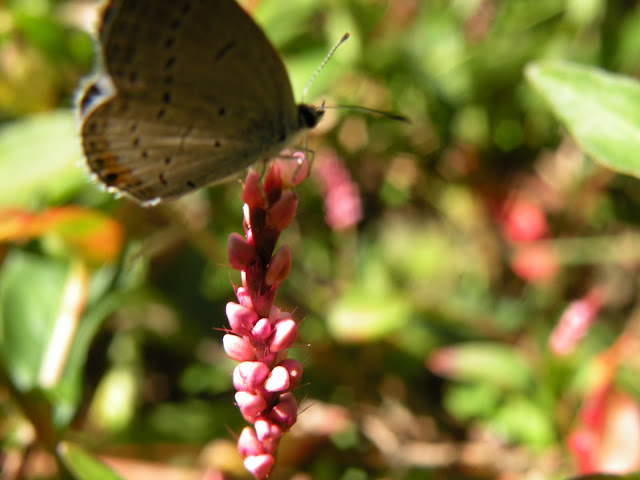 US Government site on Smartweed. 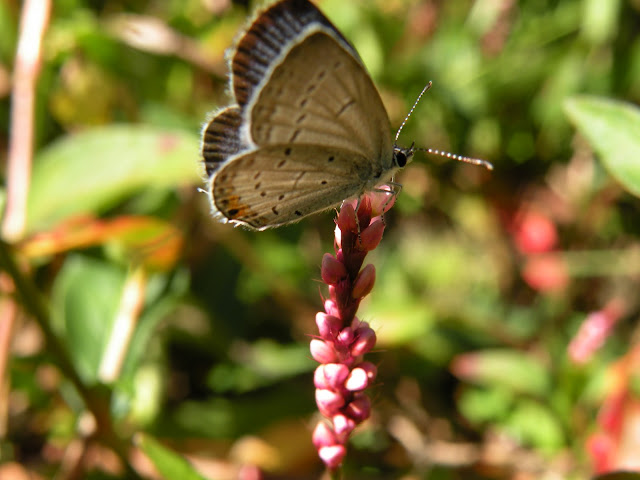 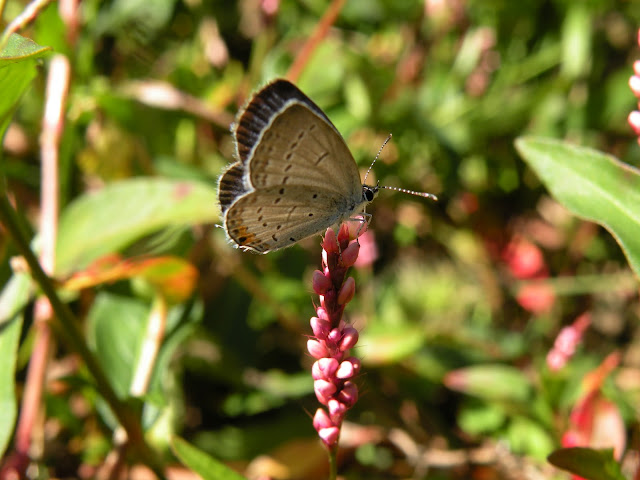 Please click on individual images to ENLARGE photos from Oct. 1, 2010. 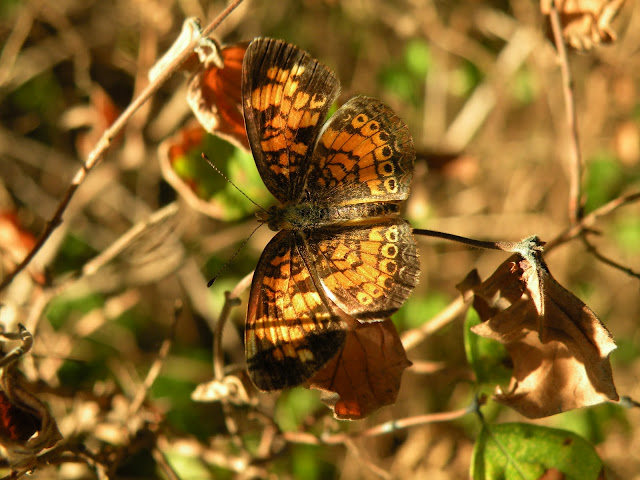 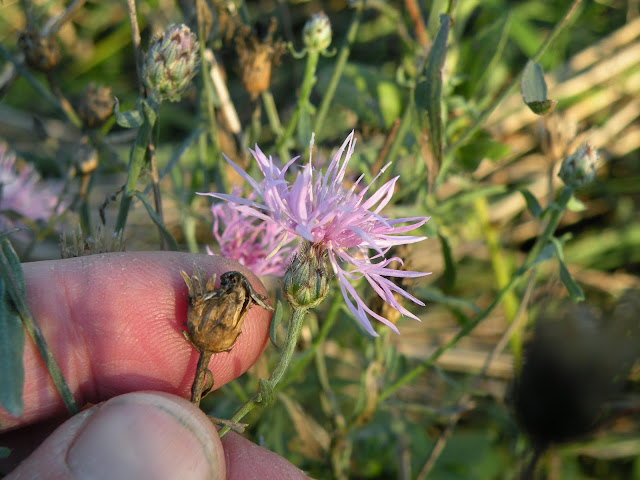 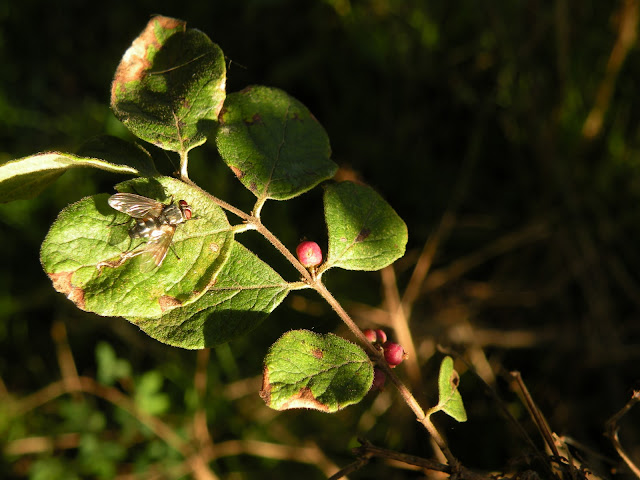 Hairstreak butterfly on yellow flowers (is it bitterweed or sneezeweed? you google it and decide) on Pinnacle Prairie west of World Peace Wetland Prairie

Please click on individual images to ENLARGE and widen view of hairstreak on yellow flower on October 1, 2010. 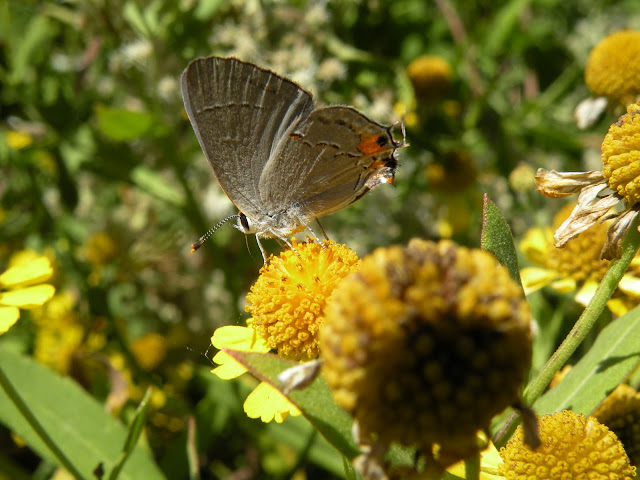 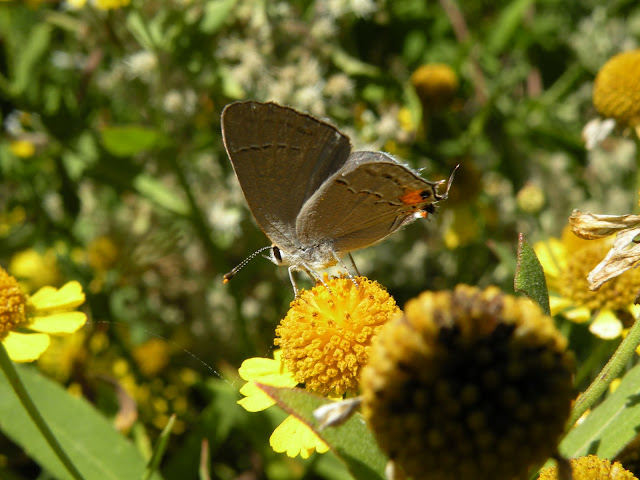 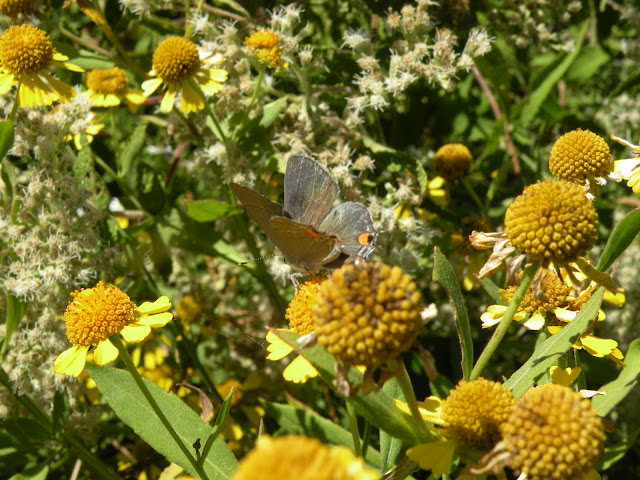