Asclepias amplexicaulis succeeds only on driest part of World Peace Wetland Prairie but is extremely successful on higher, drier ground 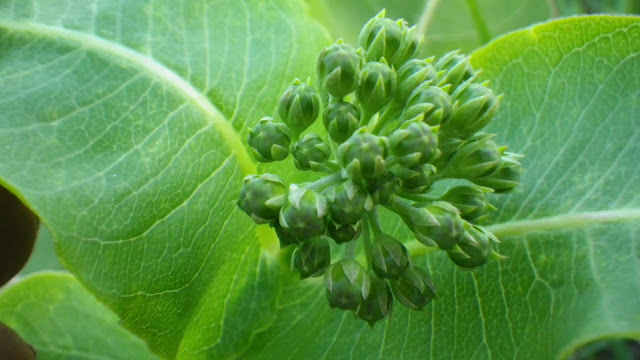 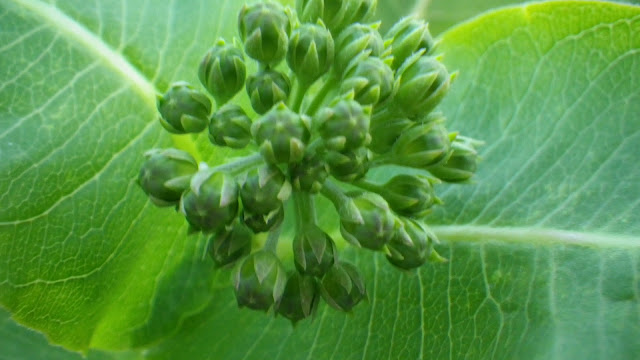 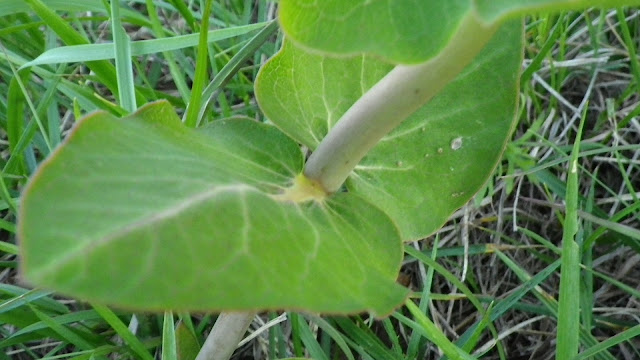 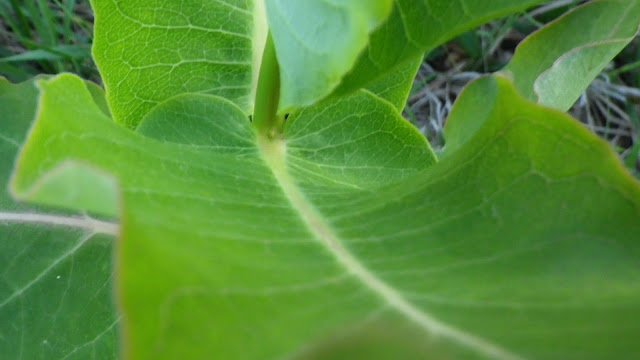 EARTH DAY 2012 photos on Flickr.
Earth Day celebrants have, in a manner of speaking, been partying around Fayetteville for at least a week. Yesterday it was earth’s turn at World Peace Wetland Prairie (WPWP) in south Fayetteville, starting at 1 PM. However, the earth got ahead. At noon a huge thunder-boomer rolled in, with plenty of rain the earth really needed. Rained on the parade, so to speak, but didn’t stop it.

I got to WPWP around 2 PM, umbrella-time. Several of us paraded along a wet path through a couple of acres, taking advantage of a sudden rain gap, with those remarkable sun rays called angel slides. Northern Cardinals and an Eastern Towhee obliged with singing. We had unexpected views of an Orange-crowned and a Palm Warbler, a singing Ruby-crowned Kinglet, and quite a few Yellow-rumped Warblers festivally-attired in yellows, blacks, grays, and whites of their upcoming nesting season. White-throated Sparrows -- many now with reddish wings, brilliant white head stripes and throat, gold accents in front of their eyes -- were singing and chasing everywhere. Then rain returned.

Of course rain with umbrellas is no impediment to flower-admiring. With and without umbrellas we enjoyed native red honeysuckle, an indigo bush just ready to bloom, a strange flowering sedge and bunches of yucca-like leaves of rattlesnake master at both WPWP and adjoining Pinnacle Prairie. The Silphium called cup plant won’t bloom until later, but its huge coarsely-toothed leaves were emerged from adjoining greens, full of promise, just right for Earth Day 2012.
Posted by aubunique at 4/16/2012 11:51:00 AM No comments:

Earth Day celebration delayed until 2 p.m. or after. Still on the Hill with the music and Joe Neal and Burnetta Hinterthuer will start the nature walks after 2 p.m.

Earth Day celebration delayed until 2 p.m. as the storms pass. The rain will make the reality of wetland's importance obvious.

Please click on image to ENLARGE for easier reading. 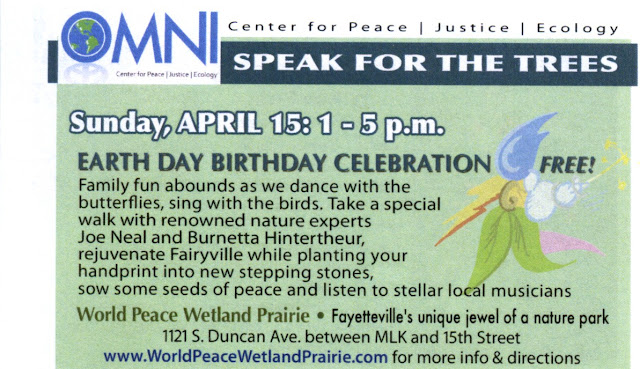 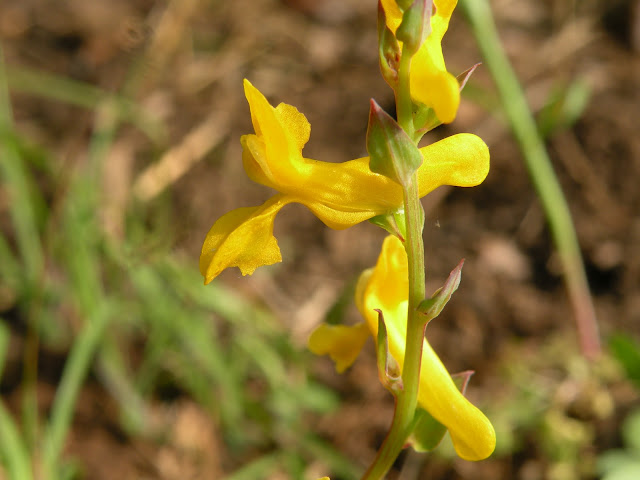 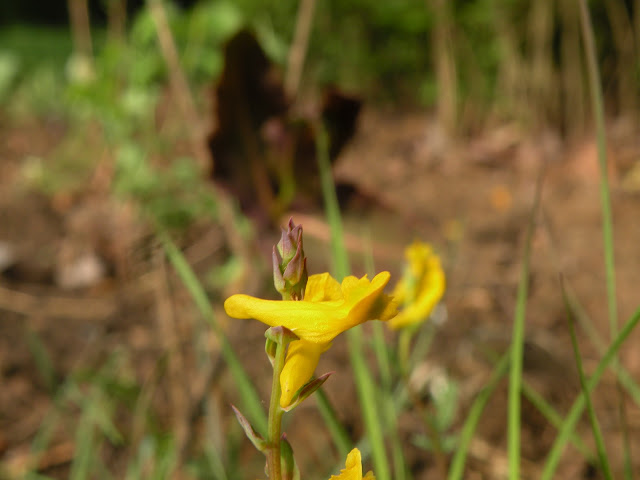 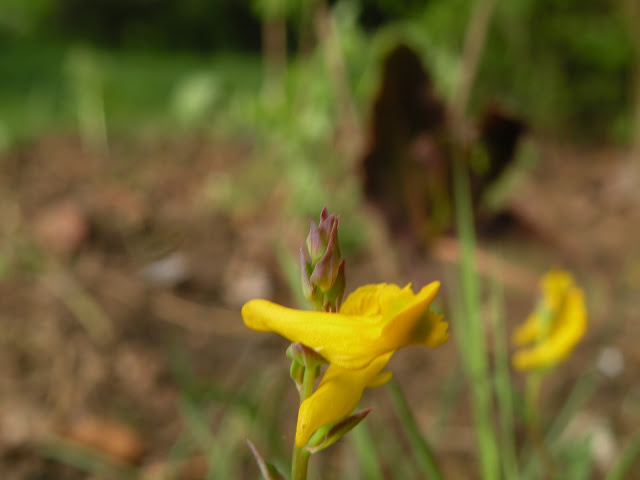 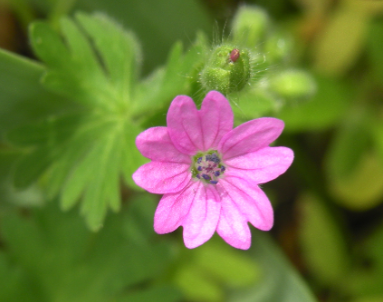 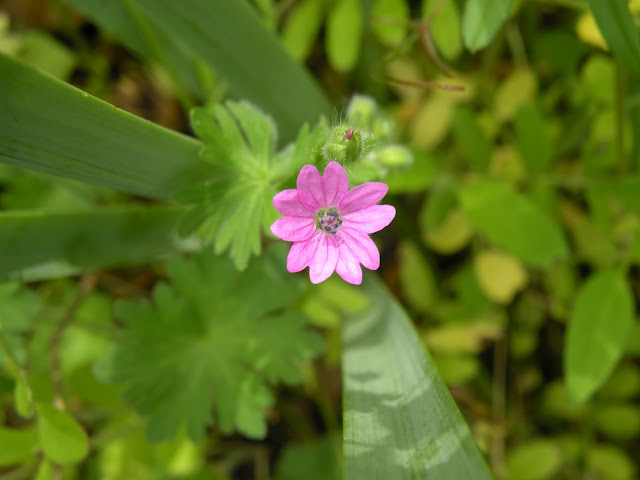 Vanessa atalanta: Red admiral butterflies dancing in the air over World Peace Wetland and our backyard 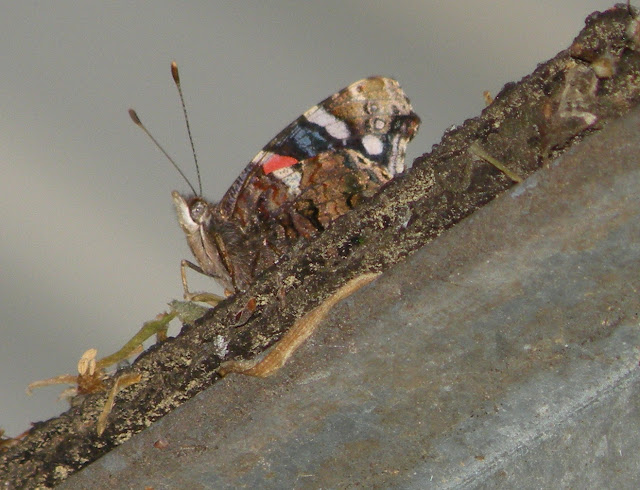 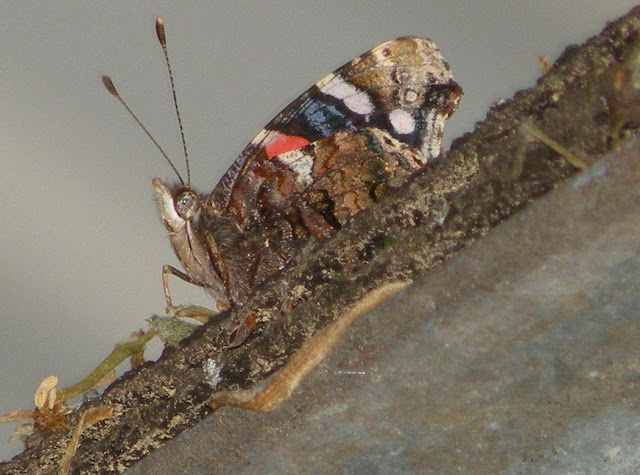 Tiny butterflies courting in the air are here only because the host plants required by their caterpillars are available in the area. Another reason not to mow now or clear out the so-called brush and weeds this time of year.
Information from reputable butterfly Web site below photos by Aubrey James Shepherd.

Family: Nymphalidae
Subfamily: Nymphalinae
Identification: Upperside is black with white spots near the apex; forewing with red median band, hindwing with red marginal band. The winter form is smaller and duller, summer form larger and brighter with an interrupted forewing band.
Wing Span: 1 3/4 - 3 inches (4.5 - 7.6 cm).
Life History: The Red Admiral has a very erratic, rapid flight. Males perch, on ridgetops if available, in the afternoon to wait for females, who lay eggs singly on the tops of host plant leaves. Young caterpillars eat and live within a shelter of folded leaves; older caterpillars make a nest of leaves tied together with silk. Adults hibernate.
Flight: Two broods from March-October in the north, winters from October-March in South Texas.
Caterpillar Hosts: Plants of the nettle family (Urticaceae) including stinging nettle (Urtica dioica), tall wild nettle (U. gracilis), wood nettle (Laportea canadensis), false nettle (Boehmeria cylindrica), pellitory (Parietoria pennsylvanica), mamaki (Pipturus albidus), and possibly hops (Humulus).
Adult Food: Red Admirals prefer sap flows on trees, fermenting fruit, and bird droppings; visiting flowers only when these are not available. Then they will nectar at common milkweed, red clover, aster, and alfalfa, among others.
Habitat: Moist woods, yards, parks, marshes, seeps, moist fields. During migrations, the Red Admiral is found in almost any habitat from tundra to subtropics.
Range: Guatemala north through Mexico and the United States to northern Canada; Hawaii, some Caribbean Islands, New Zealand, Europe, Northern Africa, Asia. Cannot survive coldest winters; most of North America must be recolonized each spring by southern migrants.
Posted by aubunique at 4/03/2012 11:33:00 AM No comments: