Please click on images to ENLARGE milkweed with monarch butterfly eggs and larvae on World Peace Wetland Prairie on August 31, 2008, in the hand of a biology teacher from El Dorado. 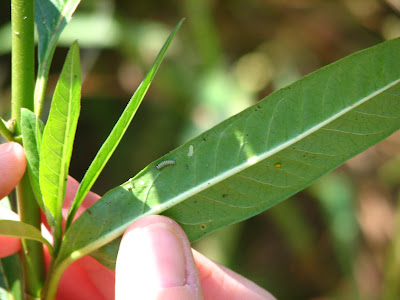 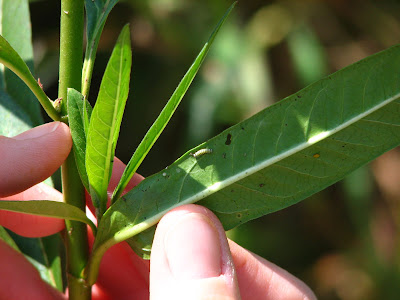 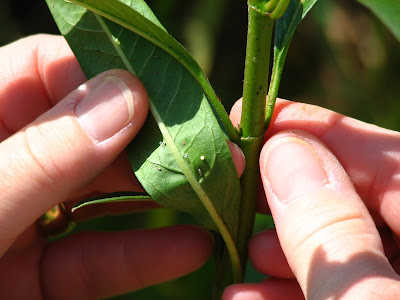 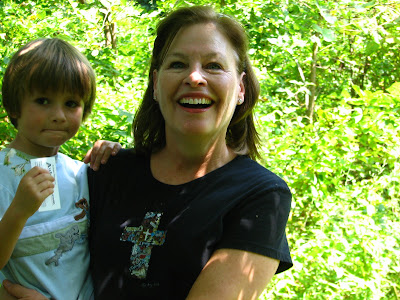 Please click on images to ENLARGE photos of butterflies and flowers and tall grass on August 29, 2008, on World Peace Wetland Prairie. 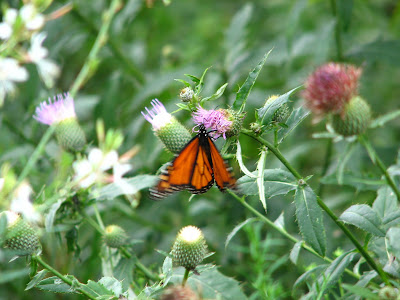 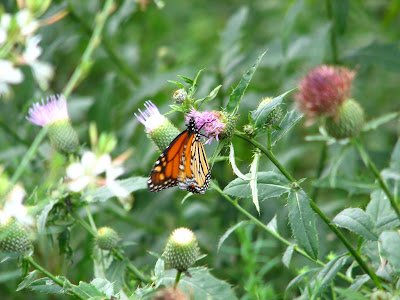 First and second photos above feature a monarch butterfly nectaring on native thistles on World Peace Wetland Prairie. Native thistles are NOT outlawed and are exceptionally valuable to butterflies, bees and numerous species of birds.
The following two photos (below) feature Centaurea Americana, the American basketflower, surrounded by Demaree's gaura or Gaura demareei, and Dematree's gaura is seen up close in the fifth photo. 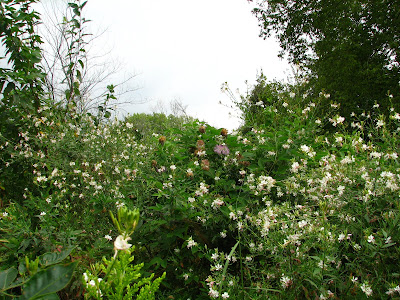 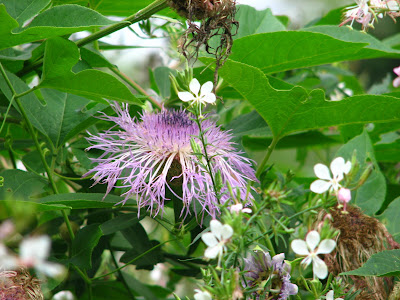 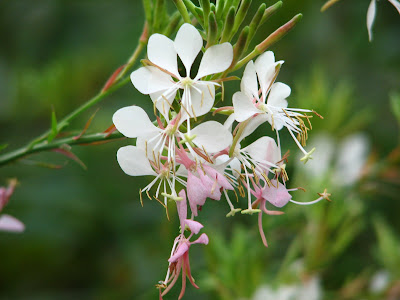 Gaura demareei above.
A small, pale butterfly rests on tall grass in the sixth photo (below). 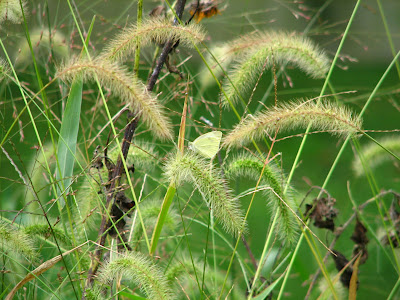 Blast from past: Reasons for protecting wetland not common knowledge among politicians

They KNOW that the federal rules are a weak compromise.

The bulk of the Wilson Spring prairie wetland is doomed to be developed. The part that remains can help educate the public about the value of such places in the Illinois River watershed.
Our neighborhood wetland prairie offers similar value as a demonstration area for owners of parcels small and large in the White River watershed. It was never plowed by the farmers in the first half of the 20th century and it was never built upon when the land was subdivided in the 1950s. The reasons are obvious.
Aubrey James Shepherd
Fayetteville, AR © 2003, 2004, 2005

A new proposal by the Bush/Cheney Administration would gut the law that protects polar bears, wolves and other endangered species

CREDO Action from Working Assets is proud to bring you an urgent alert from our friends at Defenders of Wildlife.

The Bush administration has announced a new proposal that would gut the Endangered Species Act — one of America's most important environmental laws. Now Defenders of Wildlife needs our help to preserve the vital checks and balances that protect our polar bears, wolves and other imperiled animals.

I urge you to read the message below from Defenders of Wildlife's president, Rodger Schlickeisen, and take action today to save our endangered species.

P.S. Two years ago, Defenders of Wildlife led the fight that stopped Congressional legislation that would have gutted the Endangered Species Act. Now we need your help to stop the Bush Administration from trying to do the same thing. Please take action now!
Posted by aubunique at 8/27/2008 09:55:00 PM No comments:


Please don't mow or cut your milkweed. If the leaves are being eaten away, that means that a new generation of monarch butterflies will be appearing in time to migrate to Mexico in October and return in spring to produce next year's monarchs. Their caterpillars must have some species of milkweed to survive on! 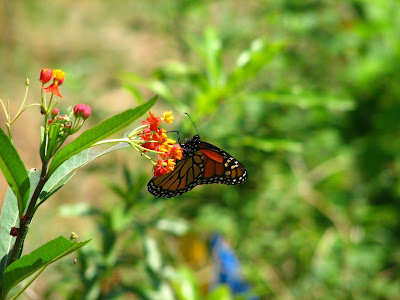 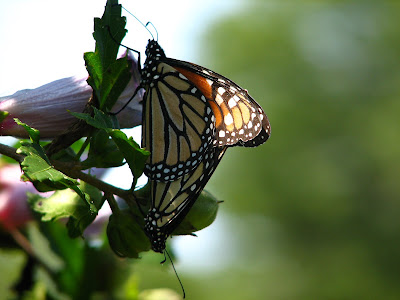 PLEASE CLICK on image to ENLARGE photo of a pair of monarch butterflies mating in the Town Branch neighborhood on August 26, 2008. The flower is a rose of sharon bush, a favorite of many pollinators and, when allowed to grow strong and at least 6 feet tall provides nesting habitat for cardinals and other species of songbirds in Northwest Arkansas. Although nonnative, it is a valuable and harmless species, especially outside a bathroom or kitchen window because bird nests in these bushes may be easy to watch from indoors without disturbing parents or baby birds This plant is on Don Hoodenpyle's property and is only 150 feet from the stream. Hoodenpyle has a south American native milkweed in the vicinity and the caterpillars resulting from the mating of these two monarchs are likely to eat the leaves of the milkweed and be ready to head southwest in October.
Posted by aubunique at 8/26/2008 03:54:00 PM 1 comment:

Please click on image to ENLARGE PHOTO of Grindelia squarrosa on August 24, 2008. 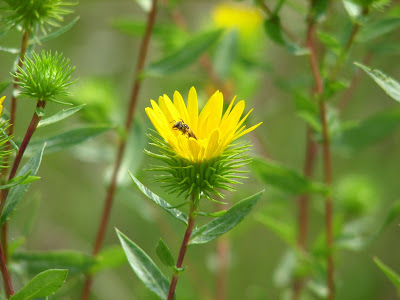 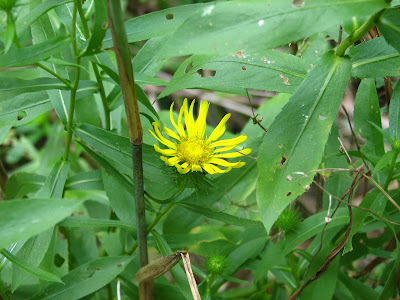 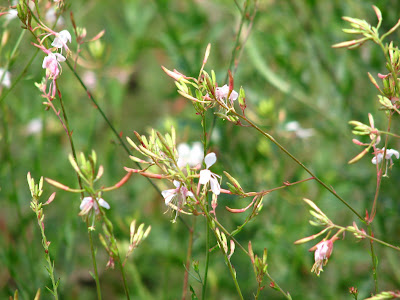 Please click on image to ENLARGE photo of dragonfly on World Peace Wetland Prairie on August 22, 2008. 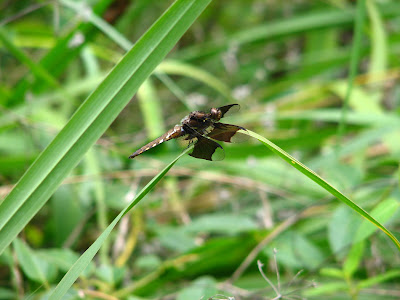 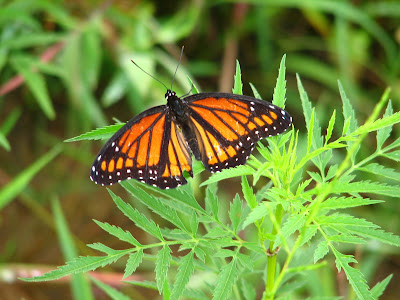 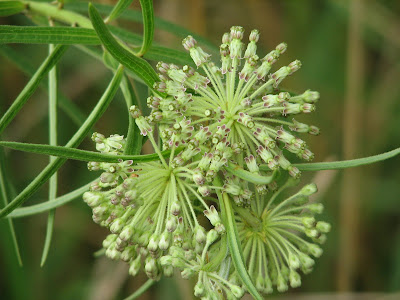 Please click on image to enlarge photos of hummingbird and American basketflower on World Peace Wetland Prairie on August 8, 2008. 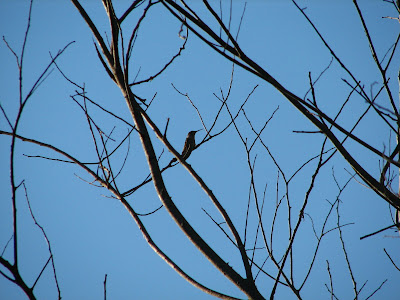 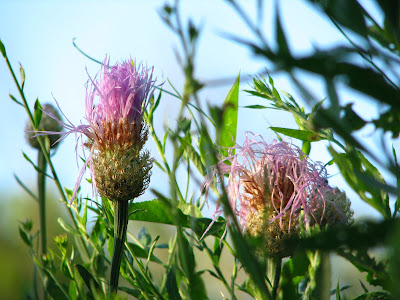 Please click on image to ENLARGE photo of bee on zinnea at World Peace Wetland Prairie on August 7, 2008. 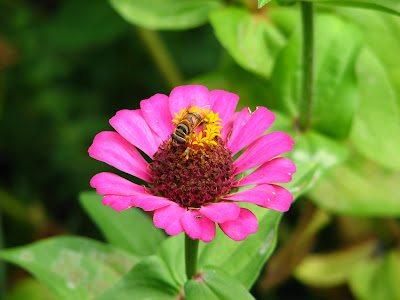 Please click on image to enlarge view of Centaurea americana on WPWP on August 2, 2008.